In just a couple of weeks, May 11th to be exact, it is officially beach season for IVGID Picture Passholders and their guests.

One of our main priorities the past few years has been to make the guest experience as pleasurable as possible for everyone who comes to the beach, and especially for our Picture Passholders.

Frequently, I receive complaints that there are too many visitors from California taking up the parking spaces at our beach.  Over the past few years, we've restricted parking at the beach during peak times for Picture Passholders as part of our Preferred Parking Program, and yet there remain a significant number of California license plates in our lot.

There is actually a very logical explanation for that.

We have approximately 6,900 property owners in Incline Village/Crystal Bay with the vast majority of the owners with Incline Village properties having beach access.

So unless you see a license plate from Iowa or Maine, there is a good chance that the vehicle parked at our beaches belongs to one of our property owners.

Once you get to our beaches, you can expect to see another year with lots of blue water and a limited amount of sand.  As I pointed out in my column last summer, the fuller the Lake, the smaller the beach!

To be more specific:

So how does Lake level translate into beach size?

The higher the rim of the Lake, the more the Lake encroaches onto our beach.  Over the past 35 years, the average Lake level in mid-summer (July 22 is the date I used) is 6,225.86.  Since 2000 the average is 6,225.54 --- so marginally less.  While a third of a foot doesn't seem like much, it actually translates into about 4 feet difference in the depth of our beach.  In fact, for every foot of Lake level, the depth of the beach expands or contracts by around 11 feet.

And given the amount of snow this year, we expect to be near the top rim of the Lake once again.

If you are interested in more detail on this subject, including photos, you can go to my more detailed article from last summer:  https://www.tahoedailytribune.com/news/opinion/incline-village-gm-corner-a-fuller-lake-tahoe-means-smaller-beaches-opinion/ 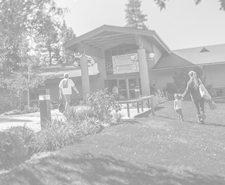