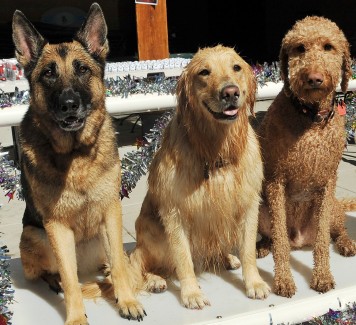 Q1. Why chose the site across from the High School for the dog park?

A.  The parcel across from the High School is the only vacant parcel large enough that meets the expectations of the community for a quality dog park.  Other sites in IV/CB were carefully considered but do not have sufficient space, adequate landscaping or parking options, or the ability to buffer adjacent residential properties, or would displace existing facilities.  For example, the space next to the Visitor’s center where the North Tahoe Lions Club Disc Golf Course currently exists, which has been proposed as an alternative site, would:

Displace several of the very popular disc golf course holes that were constructed after a $10,000 contribution from the Lions’ Club and donations from other local businesses and members of the community. Additionally, this location is adjacent to and would require direct access to Highway 28 which could pose a safety issue, and would require setbacks from and barriers to the highway.  This site would also require setbacks from the nearby residential neighborhoods, stream zones, and the Tennis Center.  If the community dog park were to be constructed on this site, restrooms and parking including ADA access would be a necessity similar to the USFS site. These setbacks and other requirements would significantly reduce the space available to construct a sufficient community dog park.  This is not fully reflected in the preliminary drawing for this site in the Community Plan.  The site adjacent to the Visitors Center may be an option but not the preferred option based on all circumstances involved.

Q2.  Was there a site selection study done before pursuing a special use permit?

A.  Yes, during the Community Services Master Plan development, the consultant, IVGID staff, and the board of trustees reviewed multiple possible sites. Community feedback was solicited via a community-wide survey administered by a third party as well as written comments from participants at the community forums that took place on two different occasions at the Chateau.  Some were rejected because they were either unavailable, potentially too expensive or not for sale or donation, or had other limitations like those identified above.  The parcel across from the High School was not only the preferred site, but it is also the most suitable site.

Q3.  Did the IVGID Board support an application for a special use permit for this site from the USFS?  If the use permit is granted by the Forest Service, does this mean that IVGID is committed to using the parcel for a dog park?

A.  Yes, the IVGID Board did, and continues to, unanimously support this permit application.  No, even if the permit is granted; if the USFS restrictions on what could be done with the site make it too difficult to create a dog park that would be consistent with IV/CB resident expectations:  IVGID may chose not to use the permit and would need to consider alternatives.

Q4.  Will IVGID use the entire parcel for a dog park or just a portion of it.

A.  IVGID would like to use the entire parcel for a fenced-in dog park on the Westside and an outdoor wooded recreational space with walking trails on the East side of the property.

Q5.  Do you know approximately how many acres of fenced-in dog run will be included in the dog park?  How does this compare to the acreage of the grassy fields in the Village Green?

A.  This will depend on the conditions of a special use permit and the final plan that comes out of the Advisory Committee that would eventually need to be approved by the IVGID Board of Trustees, but the intention is to create two fenced-in spaces (one for small and one for larger dogs) that come close to totaling the 2.8 acres of the Village Green fields.

Q6.  How can Incline Residents, and especially dog owners, provide input on the design of the new dog park?

A.  A community Advisory Committee will be created by IVGID staff to include a member of the IVGID Board of Trustees, representing various interested parties and individuals, to aid staff and the Board of Trustees in creating the vision for the park, initiating fundraising to support the project, and working through the design process.  In addition, community members will have the opportunity to pose questions and make suggestions through a web page on the IVGID website; and possibly a focused survey (similar to that conducted for Ordinance 7) will be done to solicit input on the proposed dog park.

Q7. Will there be a water feature in the dog park to help pets cool off on hot summer days?

A.  It is likely that a low-maintenance water feature with a timer, water recovery, and filter system will be proposed for the dog park to allow dogs to cool off in the summer.

Q8. How will IVGID mitigate noise issues for homes surrounding the dog park?

A.  Screening vegetation, fencing, and setbacks will be used to mitigate noise from the park.

Q9.  Does IVGID intend to allow dogs to continue to use Ski Beach to give dogs access to the Lake during the off-season after we get a new dog park?

A. Yes. Ski Beach will continue to be accessible to off-leash dogs from October to April.  Access to Ski Beach for off-leash dogs has always been provided at the discretion of the Board of Trustees, but at this time the Board has not considered or proposed changing this policy even if a new dog park is constructed. This privilege does come with responsibilities for dog owners to clean up after their dogs and deposit this waste in appropriate trash bins.  The same is true for the new dog park.

Q11. Will there be walking trails that dogs and people can use at the dog park site?

A.  The initial plan is to include several walking trails, in the Western half of the parcel bounded by Harold Dr. and Wendy Lane, which dogs and people can use. When the final plan is developed, this could change.

Q12. Will many of the trees on the parcel need to be removed?

A.  Some trees will need to be removed within the fenced dog park areas along the Village Blvd side of the parcel. in order to allow dogs to run freely and exercise, etc.  A few trees may be retained within these fenced-in runs along the periphery for shade.

Q13. Will dogs be allowed to enter the small stream on the site?

A.  No.  A wildlife corridor is likely to be created on either side of the small stream that traverses the middle of the parcel, and this will be demarcated by fencing or some other barrier.  A bridge will cross the stream to allow access between the West and East sides of the park.  These stream zones are environmentally sensitive areas that need to be protected as they run directly into Lake Tahoe which is our source of drinking water.

Q14. Will there be picnic tables and seating on the site?

Q15. What other amenities might be considered for the dog park, such as drinking fountains for dogs and people, restrooms, parking spaces, an agility course, etc.?

A.  A small restroom is anticipated, as are drinking fountains for dogs and people and scattered waste receptacles.  Benches, picnic tables, possibly an agility course, a water feature, a dog rinse-off station, and other amenities will be considered, depending on construction and maintenance costs and community fundraising efforts.

Q16. Considering that Village Blvd is a fairly busy street, how will the dog park impact traffic volumes on Village?

A. Very minimally.  A study of this question may be conducted if necessary, but this is unlikely.

Q17. Will access to the dog park be restricted to IV/CB residents only?

A.  No.  This is not only impractical but inconsistent with the policies of IV/CB.  There are several parks and amenities similar to the dog park that is not restricted to IV/CB residents.

Q18. Will there be a way for residents to give donations to support the construction and ongoing maintenance of the dog park?

Q19. Does IVGID foresee the need to raise property assessments to pay for the dog park?

A.  This is not yet determined, and depends on which amenities are included, their costs, and the number of donations made to support the construction and maintenance of the park.  Given the overall budget, there should be minimal if any impact on property assessments in order to pay for the dog park.

Q20.  What if the restrictions by the USFS for the use permit are too severe to allow for a quality dog park?  What next?

A.  We may have to compromise on some of the aspects and amenities that will be included in the dog park as a result of restrictions imposed by the USFS or the TRPA; but if these restrictions preclude the development of a quality dog park on this parcel, IVGID may have to try to locate or purchase an alternative site based on availability.

A.  A survey or another mechanism for determining the community’s preference for the USFS site over other possible sites was not specifically conducted because there simply were not a lot of viable options to consider.  An ample amount of community outreached was solicited during the development of the Community Master Plan, including two well-attended community forums, a community-wide survey, and solicitation of comment cards, to determine that the creation of a dedicated dog park for the IV/CB area was a high priority for the community.

Q22.  Will the placement of grass be allowed on the USFS site?

A.  Potentially.  This decision will be thoroughly investigated by the Advisory Committee and any consultants hired to assist in the planning process. Additionally, this may include a cost-benefit analysis in particular as it relates to ongoing maintenance and upkeep costs.

A.  Possibly.  Again, this depends on the final plan developed by the Advisory Committee and on any restrictions imposed by the USFS.

Q24.  What is the maximum number of parking spaces that the USFS will allow?

A.  This won’t be known until the USFS determines if the Special Use Permit is approved and this and other restrictions are ‘negotiated’ between IVGID and the Forest Service.

Q25.  Is IVGID still pursuing the deed to the USFS parcel?

A.  Yes, IVGID continues to work with State politicians and IVGID’s Federal lobbyist on the Lands Bill in Congress which IVGID hopes will include provisions to deed this parcel to IVGID.