In our new "Leave Only Footprints" series of articles and tips, the Incline Village General Improvement District strives to help educate our local and visitor communities about sustainability measures and expectations to keep our natural environment pristine.

Over the past 15 years (20 if you count seasonal employment), in my official capacity as a regional fisheries biologist there are a handful of things that I have come to believe as absolute truths. Paramount of these truths is that healthy streams and riparian environments lead to healthy and productive fisheries. An area that is trending toward exemplifying a healthy stream and riparian environment is the Third Creek system that originates high above the Tahoe Basin, makes its way down through the populated areas of Incline Village, and eventually terminates into Lake Tahoe. 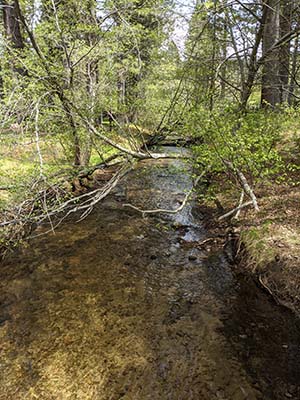 Unbeknownst to many in the area, Third Creek is an important stream to multiple species of fish that inhabit Lake Tahoe but rely on the streams around the basin to carry out their life cycle and spawn on an annual basis. While monitoring Third Creek over the past dozen or more years there has been a marked increase in the number of most species utilizing the streams during their respective spawning periods. While there are several environmental factors influencing these increases, the importance of the system health and water quality in Third Creek can not be understated.

The community and several individuals have worked to improve the system through restoration practices, stream environmental protection zones, and a general awareness of the importance of a healthy environment. Those efforts have translated to an ever improving and diverse system that may, one day, allow for the native Lahontan Cutthroat Trout to return to some of its historic spawning grounds in a limited capacity.

Aside from the occasional physical litter (improperly disposed of pet waste bags and other small eyesores) the Third Creek water quality has improved from an unimpressive system to a level that is allowing for sensitive species of fish to persist, spawn, and rear juveniles year around. The system is monitored by several agencies and groups and by all indications is trending in the right direction.

The work done by all to achieve this should be commended. Continuing to value the stream and working to improve conditions further will not only benefit the fish and species that rely on the system but the community. Incline Village should be proud of Third Creek and the emphasis the community has placed on the stream.Third Creek’s rebounding fish population is a testament to the success of the restoration projects.

About the Third Creek Restoration Project:

The Third and Incline Creek watershed was Nevada’s highest priority restoration project in Lake Tahoe. It contributed more fine sediment that damaged the clarity of Lake Tahoe than any other watershed in Nevada. The first two phases of this collaborative inter-agency project were completed in 2009 and 2010 by the Incline Village General Improvement District (IVGID), the US Army Corps of Engineers, and the Nevada Division of State Lands. Portions of Third Creek were restored, culverts were replaced, and new bridges were built.

The final phase included stream restoration improvements on Third Creek from Lakeshore Drive to Lake Tahoe, and on Third and Incline Creeks from Incline Way to State Route 28. To allow for safe, stabilized foot traffic across both creeks, pedestrian bridges and stairs were included in the project design. The project has significantly improved water quality, fish passage, and provided a recreational amenity in the heart of Incline Village.

This article was written by Travis Hawks, Regional Fisheries Biologist with the Nevada Department of Wildlife, and originally appeared in the September 2021 issue of the IVGID Quaterly Magazine.

In our new "Leave Only Footprints" series of articles and tips, the Incline Village General Improvement District strives to help educate our local and visitor communities about sustainability measures and expectations to keep our natural environment pristine.

Quarterly printed newsletter of the Incline Village General Improvement District, with updates on programming and events, venues, people and more.