Thank you for a great 2021 season! The Tennis & Pickleball Center is closed for the winter. We are excited to hit the courts with you again in May.

Please visit the Winter Indoor Pickleball page for information about dates and times to play indoors at the Recreation Center.

Randy played college tennis at Cal State Bakersfield where he qualified for the nationals in both singles and doubles each year. After college, Randy became Assistant Coach of Pepperdine University, a top 5 nationally ranked team. In 1989 he was Activities Director, then Tennis Director of the Warner Center Club in Canoga Park, California. In the early ‘90’s, Randy served as a “hitting partner” for then teenager Lindsey Davenport who went on to win several Grand Slam Titles.  In 1996 he became Tennis Director of The Springs Club in Rancho Mirage, California. Randy was then named Tennis Director at Indian Ridge Country Club in Palm Desert, California. Randy has won three USTA National Doubles titles; the National 40 Grass Courts, National 45 Indoors and the National 55 Hard Courts. He has been a USPTA certified professional for over 20 years who enjoys working with juniors and adults of all levels. 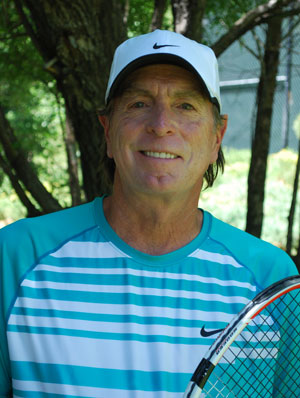 A Chicago native, Billy attended Southern Illinois University, Carbondale and earned a degree in physical education. He played college baseball and later professional hockey, many years ago. Billy is USPTA certified Pro 1 and has coached North Tahoe boys varsity tennis and many of the areas top players and juniors. Billy offers a devoted, technical, strategic and personal teaching approach to all skill levels and abilities. He is available for private, semi-private, group lessons and clinics.

Deanne grew up in Oregon where she was a three time High School State Doubles Champion. She played college tennis at Oregon State University and went on to be a tennis professional a Tumwater Valley Racket Club in Olympia. Deanne then began her 25 year teaching career in Health and Physical Education for Portland Public Schools. She also coached tennis at Pacific University and Benson High School where she won a USTA National No Cut Coach award for the Pacific Northwest.

Deanne continues to compete at 5.0 and recently as a 4.5. She went to USTA Nationals several times with teams at the 5.0 level. For over 10 years, Deanne and her doubles partner were ranked #1 in the PNW section. Deanne has been a USPTA certified Professional for over 35 years, loves to teach and is very excited to be back at the Incline Village Tennis Center.

Dominic has been a teaching pro at the Incline Village Tennis & Pickleball Center since 2016. He’s a USPTA Certified Level 1 Coach and teaches youth clinics, camps, tennis academy, cardio tennis and adult lessons. Dominic has been playing tennis since he was a boy and won State Champions for his high school team two years in a row. He also has been playing pickleball for several years and is available for private pickleball lessons. When he’s not on the courts, Dominic likes to surf, run, snowboard and lift weights to stay active.

CJ teaches the pickleball clinics here at the Incline Village Tennis & Pickleball Center and was the tournament coordinator of the inaugural Incline Open Pickleball Tournament. She is a highly respected and sought after coach and lifestyle expert for Better Pickleball and Age Well with CJ, both companies being dedicated to helping players over 50 live their best lives on and off the pickleball courts. She also cofounded the first online pickleball community in 2020, VIPickleball.

Open to the public with weekly adult clinics, mixers, socials and pickleball. There's always something going on at the Tennis & Pickleball Center.